As I’m sort of hyperfocused on the Monkees at the moment, I thought I’d share a post from Mike’s facebook page from August , 11. He writes fairly amazing things but then takes them down a couple of days later. I’m going to make an effort to repost stuff he writes that I find to be interesting. It’ll be like a co-blog, but he just doesn’t know it. Here we go:

Read no farther if guitars do not interest — however, if they do here is some pass along info.

Remember the blonde Gretsch 12 string I played on the Monkees? The original was made for me and I left it at Red Rhodes shop to be repaired. One awful night it and a dozen other guitars were stolen.

At a recent NAMM show I asked the present Gretsch owners if they would build me another and they graciously consented. It is fashioned from an existing 6 string, this one a Country Classic II, so it is a touch exotic — and probably a one off.

It did not play as well as the first one so I took it over to The Guitar Shop in Santa Cruz, California. Steve Crisp is the owner and master luthier there and he set it up for me and tweaked it to perfection; precise intonation and buttery smooth action. (FYI I tune it down a whole tone).

He really has a knack for this — dedicated mostly to Electrics but I believe he is just as good with Acoustics.

So this is my tip to you if you need guitar work done, and thanks to him, for such a great job on this instrument. I have it up and running now, playing it a lot, and am fine tuning it for the Monkees concerts in November.

The Gretsch that he mentions – this is a guitar he played alot with the Monkees and as I read his post originally, I was all – “Oh yeah, you played that in the What Am I Doin’ Hangin’ Round video.”

“In the late 60’s and early 70’s I had two guitars stolen. The natural blonde Gretsch 12 string I played on the Monkees, and a white Gibson SG with gold colored pickups I played in the movie Head. I know they are out there still and I miss them and would like to have them back after all these years. Whoever has ended up with them, please return them, no questions asked. They were and are an important part of my life.”

UPDATED  Contest is over. I was 6th place in voting but the guys get to decide what pics they like best. I would hope that Dan likes his feet…

Hoobastank is coming out with a new album in September. They’re running a contest right now on Facebook for tour photos. I’ve been to several shows and as I have a thing for guitars and pedals, I usually stand near Dan Estrin, guitar player extraordinaire. I end up with alot of photos of his feet. The pic I’ve entered in the contest is from 2006. I was so enamored with this picture that it’s been the wallpaper on all my computers since. 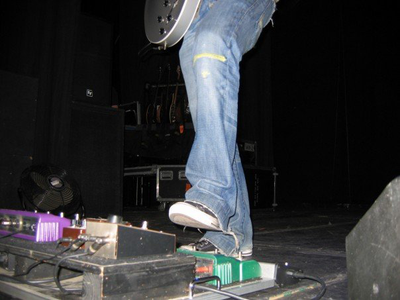 If you could take a moment and vote for me, that would be awesome! Thanks.

Pieces by Hoobastank – This song just makes me want to jump up and down. Have I mentioned that I’m 40 and about as close to a soccer mom as you can get without actually having a child who plays soccer? I can’t help myself, I become a spring every time I see them perform this in concert. It’s also on my Walking Playlist and I’m able to up my speed on the treadmill as soon as I hear the opening. I love the effects pedal that Dan Estrin uses at the beginning. I wish there was a way to type the sound he makes… “Suffocating, sinking further almost every day. Barely treading water, knowing I will not give up, I will not give up. I will not give up.”

(FYI – there was no official video for this song but found a nicely edited one set to Anime.)

I love watching his feet at concerts. How weird is that?